Is Microsoft HoloLens Worth It For SMEs?


Microsoft's mixed reality device is impressive but not cheap.

Virtual reality, after many failed attempts to become a real reality, is finally gaining significant interest in the consumer space. The Oculus Rift and the HTC Vive, for example, are getting cheaper but more powerful all the time, while Google’s budget Cardboard and Daydream platforms have brought simple VR to the masses. But some firms are taking a different tack, pinning their hopes on augmented and mixed reality instead. Microsoft HoloLens is arguably the best known and most advanced of such products, but what does it actually offer, and why might it be particularly suited to business?

Known initially as Project Baraboo, HoloLens is Microsoft’s mixed reality headset, which was first announced in 2015. Three years on, the device is not available as a consumer product, but businesses have been able to buy the development edition since 2016.

As a mixed reality (MR) device, it differs from virtual reality (VR), because it mixes virtual elements with the real world, rather than immersing the user in a completely new world.

If you’re familiar with augmented reality (AR), then you’ll no doubt see some similarity between that and MR, but with AR, virtual objects are simply overlaid onto the real world, whereas MR sees them being anchored to reality.

That’s an important distinction, and one that helps to position HoloLens as an enterprise product with genuinely useful business applications, rather than just a toy or a gaming device.

The HoloLens packs in an impressive amount of technlogy.

How Does It Work?

Essentially a full computer in a pair of glasses, the HoloLens packs an impressive amount of technology into a relatively small space, including:

- An HD camera for pictures and videos

This is just a small taste of what Microsoft has managed to cram into the HoloLens. If you’re so inclined, you can find more hardware details on the Microsoft site, but what really matters is what all this combined technology enables the HoloLens to do. As well tracking the real environment, it also has to keep tabs on where you are in relation to that environment, how your head is tilted and how all the virtual objects should react depending on how you’re moving and how you’re positioned. That’s an incredible amount of data that has to be processed, all within the HoloLens headset. 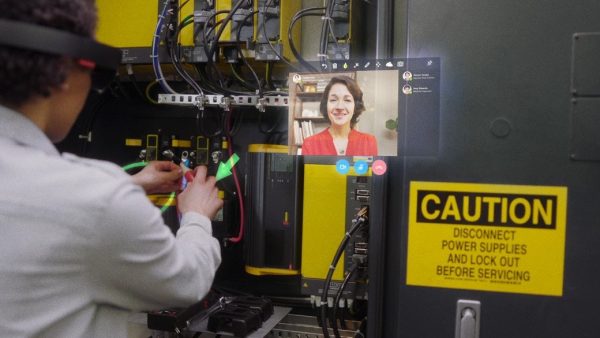 Microsoft is initially aiming the HoloLens at the enterprise sector.

How Much Does The HoloLens Cost?

As an enterprise product, the HoloLens comes with a price to match. While VR headsets like the Oculus Rift and HTC Vive have come down in price and can now be had for less than £500, the HoloLens weighs in at £2,719 for the Development Edition.

That, however, is not the recommended product for businesses. Instead, they should looking at buying the Commercial Suite, which costs £4,529. This includes the same hardware as the  Development Edition, but you get a whole bunch of extras that make the device suitable for business purposes. These include enterprise security features, a business-level warranty and Microsoft Store for business, among other things.

Although Microsoft's current focus is on developers and businesses, there are already games for HoloLens, and a retail version of the device is supposed to be in the works.

Why Should You Consider HoloLens?

The million dollar question: why would you actually want to buy a HoloLens?

If you’re a fan of technology and gadgets, you might simply want one because it’s cool. From a business perspective, that cool factor could help to make your company look up to date and ahead of the curve. It sounds like a small benefit, but if looking like a business that embraces new technology wins you an important contract, then it could have a major impact on your business.

But let’s pretend that you’ve had a HoloLens for a while and so have your competitors. At this point, you could no longer justify having one just because it’s a bit fancy. In this situation, what other advantages could it bring to your business?

At the recent Microsoft Build 2018 event, Microsoft announced the release of Remote Assist and Layout, two major new applications that showcase what HoloLens can do and how businesses can use it.

Remote Assist is a collaboration tool that enables people to work together with the assistance of heads-up displays, hands-free calling, live annotations and image sharing. The following video demonstrates how the technology could be used.

What this demonstrates is that mixing virtual elements with the real world can save time and allow people to achieve tasks more efficiently and more effectively. This could work just as well in, say, a medical or emergency situation, where remote workers could be talked through difficult procedures in real time.

Microsoft Layout is a design application that allows users to import 3D models into the real world, placing and manipulating them as they please. Again, Microsoft has created a marketing video to demonstrate how this can work.

It's easy to see how Layout could be handy for all kinds of designers, working in anything from the automotive industries through to construction. The time and money saved could make it invaluable.

Both Remote Assist and Layout have been available since 22nd May as limited-time previews.

Should You Buy A HoloLens Headset?

Like other high-tech enterprise products, such as the Surface Hub, HoloLens has the potential to make a real difference in your business, if you can afford it. But if you don’t know what you’d use it for, then it’s only sensible to work that out first. As with any new technology, being an early adopter comes with risks attached, and it's up to you to decide if they're work taking.

If you can think of a compelling use for the HoloLens, it’s an intriguing product. It’s also one that could potentially save you time and money, enabling you to see how objects would fit into your current environment before you buy them or to share information with remote workers that you’d normally have to show them in person.

Such applications still might not be enough to persuade you to buy into HoloLens right now, of course. But even so, it has the potential to forever change the way many of us work.

Prev Previous Are You Getting The Broadband Speeds You're Paying For?
Next TSB's Problems Mount As It Accidentally Shares Customer Data Next