Is Microsoft’s Surface Hub 2 Worth The Investment?

Everyone loves a good product reveal and it’s fair to say that Microsoft didn’t hold back on its video demonstrating the Surface Hub 2, the newest version of its interactive whiteboard due for release next year. Watching the opening seconds of the official video for the announcement, you’d be forgiven for thinking this was a teaser trailer for the latest superhero film. Orchestral music? Check. Glimpses of shiny, futuristic-looking things? Check. Fade-ins and fade-outs? Oh yes, plenty of those.

In fact, the video actually takes a full 40 seconds or so before the full product reveal, eventually showcasing some of Surface Hub 2’s functionality and aesthetics. It’s a smart, slick production - but then you’d expect that of a multi-billion dollar company developing technology that’s going to cost interested businesses thousands. The original Surface Hub, released in 2016, cost between $9,000 and $22,000 for its 55-inch and 84-inch versions respectively, and while we don’t know the price of the Surface Hub 2 yet, reports online have suggested something around $5,000.

So what exactly is Surface Hub, and why are some businesses prepared to stump up the cost? According to Microsoft, it's sold to more than 5,000 customers in over 25 markets globally, and it claims that more than half of Fortune 100 companies have purchased Surface Hubs to improve their team’s efficiency and how they collaborate. Let’s be honest, 5,000 is hardly a massive number but this is a relatively niche product, and at those prices, Microsoft won’t be too upset. 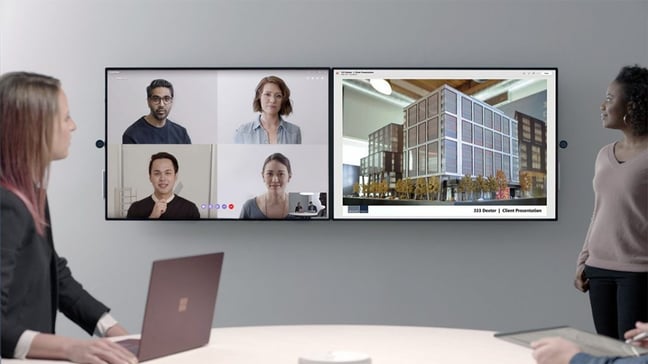 The Surface Hub 2 is even fancier than its predecessor.

Surface Hub is, at its heart, a collaboration tool for business. Microsoft views the product as technology for the modern working environment, an environment in which a “team-based, collaborative culture” makes for a more effective and productive business. The display can be directly inked on, users can pull in multimedia and content from other apps, video-conferencing via Skype can be accessed with a tap, and content can be shared and communicated easily - it basically brings together an office’s productivity onto one, huge screen.

In development for over a decade, the Surface Hub was born out of the idea of bringing a multi-touch tool for businesses, something first demonstrated at a TED talk by Jeff Han. Han would go on to develop the multi-touch concept further with his company Perceptive Pixel, which created large-screen multi-touch displays for the likes of CNN. Microsoft subsequently bought the company in 2012, and the first Surface Hub was announced in 2015.

And now we have Surface Hub 2.

Surface Hub 2 is a step up from its predecessor in several key ways, not least its orientation. Unlike its predecessor, Surface Hub 2, which is only coming in a 50.5-inch iteration for the follow-up release, comes kitted with “dynamic rotation”, meaning content can be viewed in portrait or landscape view, and up to four screens can be ‘tiled’ together (positioned alongside each other in layman’s terms). Tiling is another important addition, allowing for large-scale, undeniably impressive visual impact when multiple pieces of content can be displayed side by side - at a hefty price, of course. Imagine holding a video conference with a tiled display of four 50.5-inch screens in a row? Best make sure you’re looking your best that day, particularly as it comes equipped with a better-than-4K display and 4k cameras that rotate with the device. Far-field mic arrays also pick up any whispers from anyone present.

Compared with the Surface Hub, next year’s model will also be easier to move around and positioned as a by-product of the flexible orientation, and more people can get involved in the meetings too with multi-user sign-in. With users able to simultaneously access documents and other content on the same board, collaborating with teammates as they do so, this promises a far more natural and interactive experience.

Microsoft is planning on previews later this year before the full launch in 2019, but is this really anything other than a shiny new toy? After all, a collaborative tool such as this is only ever going to be effective if the business in question is fully invested in Microsoft’s collaborative software. Using these as a very expensive, albeit very nifty, smart display screen really isn’t the point, and company executives would be best to steer clear unless they have clarity on their plans for using Surface Hub 2.

Multi-touch screens look and feel like the future. They will impress in board meetings and wow visitors to the office, and there are other ways to collaborate together, even on a scale this large. Google’s Jamboard is a 55-inch 4K whiteboard with direct inking and content sharing using Google’s own software suite. The Jamboard mobile app also lets users join in the ‘jam’ session from their phones, and the boards, which cost £3,99, support up to 16 touch points on one device.

Is the Surface Hub 2 - or Jamboard for that matter - worthy of a sales pitch? It is certainly an eye-opener to see it in action and rather harks back to some of the great science fiction movies in recent years. Microsoft presumably feels confident that the 5,000 customers who have signed on so far proves there's enough interest out there for this new version to have been worth the investment. Businesses seeking an all-in-one collaboration and teamwork tool that will have impact would be understandably interested in a whiteboard/Windows 10 device with this much power.

But as a great (and entirely fictional) man once said, ‘with great power, comes great responsibility’. Investing in a powerful, fancy new technology to aid with collaboration and productivity will only work if everyone in the business that will be using it buys in to it from day one. So the question businesses really need to ask themselves is not what can the Surface Hub do for them, but what can they do with the Surface Hub?

TMB is a Microsoft Gold Partner, and we work with businesses of all sizes, helping them implement Microsoft solutions. For more information, phone us on 0333 900 9050.

Prev Previous Is It Time For A GDPR Sanity Check?
Next GDPR Confusion Continues To Mount Up Next