The Beginners' Guide To Virtualisation

Could your business benefit from going virtual?


Although it’s been around since the 1960s, virtualisation is a technology that is still developing and improving in many exciting ways. Fuelled by faster, more accessible broadband connectivity, it offers massive potential for businesses and other organisations.

In this guide, we’ll explain what virtualisation is, how it works and what it can do for you.

In the simplest of terms, virtualisation describes the use of virtual computer systems and resources. So instead of having an actual computer with physical components, you use software to create virtual versions of hard drives, processors, memory and so on. This can be done on a huge, industrial scale, but it can also be done locally on your own PC or server.

We’ll use a typical small-scale example to give you a better idea of how virtualisation works.

Let’s say you have a PC running Windows 10. You would like to try running something in Windows 8, but you don't want to install a whole new operating system on your computer. Using virtualisation software such as VMWare, you can create a virtual computer, which you can then install Windows 8 on. This virtual machine will open up in an application window on your Windows 10 PC, but it will operate exactly as if it were a different computer.

You might also use virtualisation to test software or for security reasons. You could install another copy of Windows 10, for example, on your virtual machine, run whatever tests you need to, and if anything goes wrong with it, you can simply delete the virtual machine and start again.

Virtualisation In A Business Setting

In a typical work environment, local virtualisation like that described above is not commonly used. What you might see instead is desktop virtualisation using an on-site server. In this scenario, a local server is used to host multiple virtual machines, which can then be distributed among individual users. Depending on how this is set up, users may have their own individual virtual machine, with their own applications and software licences. 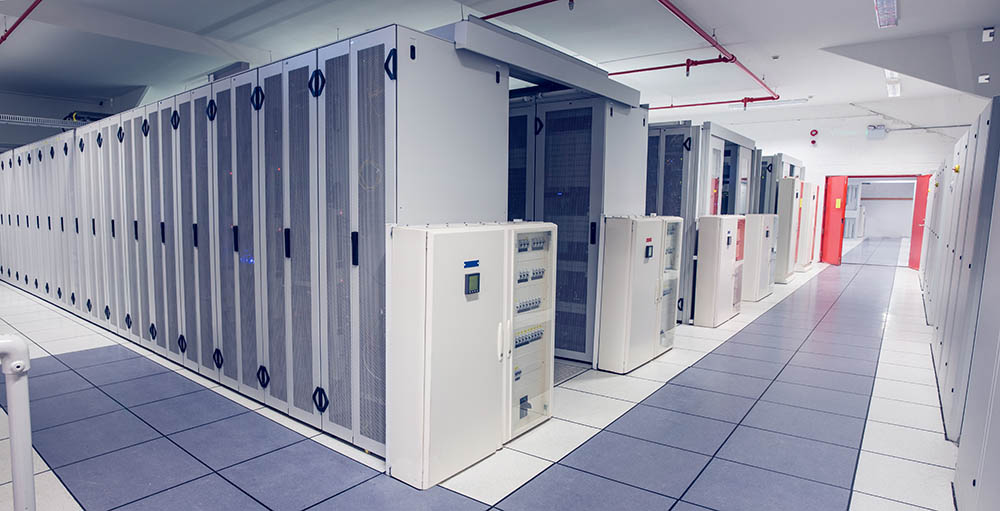 ^ Server rooms like this are helping to drive cloud computing

As well as serving virtual machines over a local network, it’s also possible to deliver them over the internet. Users get access to their own virtual computer, which they can then access from anywhere with an internet connection.

There are plenty of companies that offer this service, including Microsoft. It’s even possible to get high-performance virtual machines for demanding tasks like visual editing and gaming.

It’s not just computers than can be virtualised; it’s also possible to virtualise whole servers. This is particularly useful for cloud computing. Instead of having a server on site, businesses can pay for a virtual server, which will be hosted on a data centre server, along with hundreds of other virtual servers. The big players in the virtual server market are Microsoft, Amazon and Google.

One of the key advantages of this system is performance. When virtualising on your own computer, you’re limited to what it can do. You can’t, for instance, host a virtual machine with 100GB of storage if your actual PC only has a 50GB hard drive.

But when your virtual machine is hosted elsewhere, the possibilities are endless. Within seconds, you can get access to a far more powerful computer, with all your favourite applications pre-installed – and it’s the same with virtual servers, of course.

The price implications are clear: if you don’t have to buy an actual PC or server, then you save money. In most cases, you’ll pay subscription fees instead, making it easier to predict costs and prepare your budget appropriately. And on top of savings on hardware, you’ll reduce your business’s energy consumption too.

Furthermore, the fast scalability of virtualised IT infrastructure has benefits both for computing performance and cost. Rather than having to buy new IT equipment or upgrades for the things you already have, you can simply request better virtual desktops or servers, and it can be ready for you in mere moments.

If you use virtualisation to serve virtual desktops to your workforce, its reliant on the central server (whether that’s your own server or a cloud server) being in good working condition. Downtime for that server will mean downtime for everyone, as will loss of internet connectivity if the system is cloud based.

This principle applies to virtual servers too. If your email exchange is hosted on a cloud server, then you won’t have direct access to the hardware, which could be a problem if something goes wrong.

For some organisations, this may also run counter to their legal obligations for data security and so on.

Virtualisation Vs The Cloud

Understanding the difference between these two technologies can be tricky. Essentially, virtualisation is what makes the cloud possible. You can use virtualisation yourself to host virtual machines and servers over your network or even over the internet, but with cloud computing that’s all taken care of for you. It’s still using virtualisation, but it’s being carried out remotely by a third party.

Fancy taking a few steps back in time with a virtualised Windows 95 desktop? You can! Just head to copy.sh/v86. On this site, you can choose between 14 old operating systems, which will then run in your web browser. You can even choose the machine’s memory size and upload disk images of CDs, floppy disks and hard drives.

Prev Previous What's Taking Up All Your Space?
Next 3 Criteria To Consider When Selecting The Best Data Recovery Service For You Next