Things, a wise man once said, can only get better. That man was Peter Cunnah, lead singer of pop dance combo D:Ream. And he didn't say those words so as much as belt them out on stage with an infectiously upbeat melody - often with none other than floppy-haired professor of physics Brian Cox playing keyboards in the background. Either way, it's safe to say Cunnah's words were probably not intended as an analysis of the likely progression of 1990s technology (or as the official theme of New Labour, for that matter), but they could have been.

Indeed, the 1990s was a time when anything seemed possible. Much of the technology we all use in our workplaces today first began to take shape in this decade, and communications began to take huge strides, thanks to increasing mainstream internet access. But things have moved on so much and so quickly, much of the technology we used to get work done during this era now looks positively quaint and outdated.

Here are just a few of our favourite 1990s highlights. 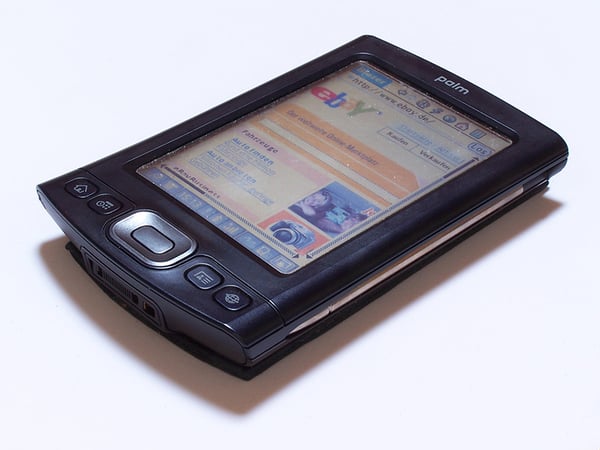 Also referred to as handheld PCs, PDAs first came to market in the 1980s, but they were common in the 1990s too. Offering a range of organisational and productivity features, PDAs were portables devices with electronic displays and on-board storage. With a PDA, you could manage your calendar, look up contact details, take notes and so on. Most PDAs had wireless communication abilities too, allowing users to connect to the internet of the day or to pair with a mobile phone. Some even functioned as phones themselves, and they all offered audio capabilities, allowing them to function as media players. Some had full-colour displays, while others were black and white. Of the many companies that produced PDAs in the 90s, among the most prominent were Palm Inc, Psion and HP. Apple also produced a series of PDAs under the Newton platform, which is widely regarded as having been a massive failure due to its high price (like most Apple products) and the fact its much-vaunted handwriting recognition system was terrible.

Superseded by: Smartphones and tablets 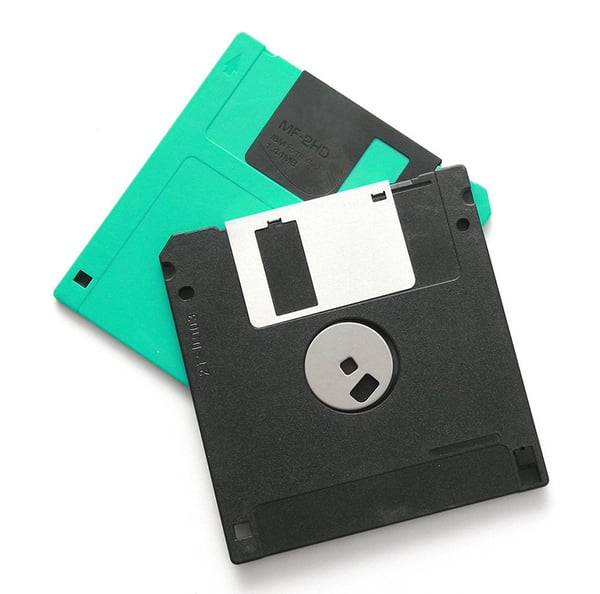 Floppy disks were cheap and convenient but didn't offer much storage.

Floppy disks first started being used in the 1970s, but it wasn’t until the 80s that the familiar 3.5-inch version, with its distinctive sliding metal cover, was introduced. Throughout the 1990s, it was the portable storage format of choice, offering 1.44 megabytes of capacity in its most common form. (Higher-capacity disks were produced, but they failed to take off in the same way.) That wouldn't be enough space for even one photo from an average smartphone today, but at the time, it was plenty for storing text files, making the floppy disk ideal for transporting files for business and education. But with many games and programs coming on multiple floppies, its limitations were clear. The beginning of the end was eventually signalled in 1998 by Apple, which became the first major computer company to stop including floppy drives in its products.

Another technology that began life in another decade (it was released in 1982), Compact Discs changed everything. Offering capacity measured in hundreds of megabytes, they made the distribution and installation of large software programs easy. But it wasn’t until the 1990s that CD-ROM really became popular, and it’s important to note that ‘ROM’ stood for ‘read only memory’ – you couldn’t write to these discs. It wasn’t until much later that the writeable format, CD-R, was affordable enough to become commonplace; the first CD writer to cost less than $1,000 didn’t come out until 1995. No doubt, that helped keep floppy disks going for a while too.

Superseded by: DVD and flash drives 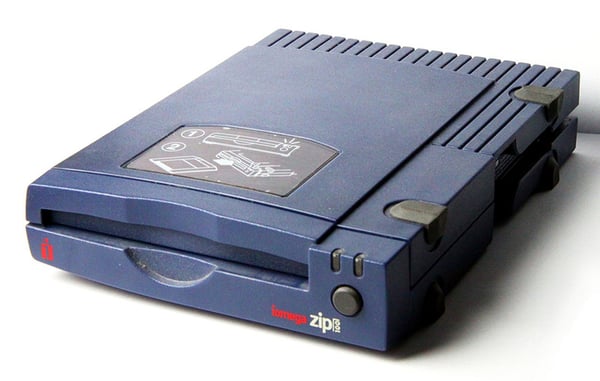 Zip disks were much more capacious than traditional floppy disks.

While floppy disks remained in use, thanks to their low price, the tiny amount of storage they offered limited their usefulness. One popular solution came from a company called Iomega. In 1994, it released the first Zip drive, which accepted a proprietary floppy disk format that could hold up to 100MB of data. Later Zip disks extended that capacity to as much as 750MB – ideal for backups. Although more expensive than floppies, Zip drives were reasonably priced, which helped push uptake. 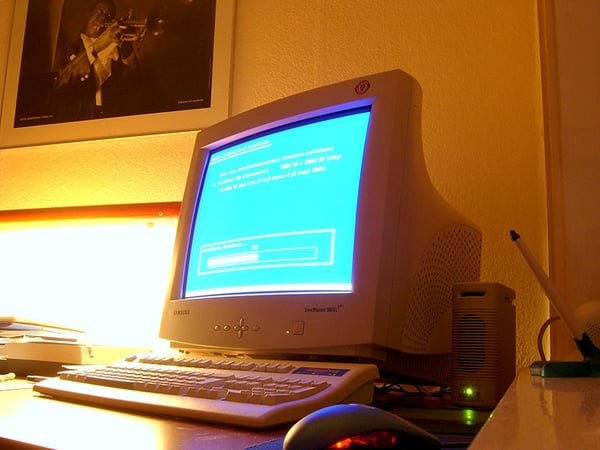 In the early 1990s, there were numerous big computer manufacturers, and popular models included the Commodore Amiga, the Acorn Archimedes and the Atari ST. But it was Windows PCs that would eventually come to dominate both business and home user markets. However, one thing that united these many disparate systems was their love of beige. Beige computer cases, beige monitors, beige keyboards and beige mice. Then, in 1998, the first iMac was released, and nothing was ever the same again. With its colourful plastic shell and distinctive shape, it showed the world that computers didn’t have to be beige.

Superseded by: Lots of black computers and PCs that look like Apple products

The internet may be a constant security risk and a huge distraction, but it’s also an indispensable tool for business. For a start, having a website allows businesses not only to advertise their products and services but also to sell them, right from within the browser. The internet also enables instant communication, a rich source of research material, and a way to send and receive payments in seconds instead of hours. But in the 1990s, getting online was a much different experience compared to today. Dial-up internet was all that most people and businesses had access to. Translating high-pitched squeals and clicks into data over a traditional phone line, it was inefficient and slow. Plus it tied up the line; businesses would need a second line if they wanted to use the internet and take calls at the same time. Nevertheless, from small acorns grow great oaks, and it was this technology that led to modern broadband connections and cloud computing.

Using the same technology as dial-up internet, fax proved so good at fulfilling its remit that many business still use it today, despite there being much better, more up-to-date alternatives. Fax, you see, answered one particular question perfectly: how do you get an identical copy of a document to someone in another location without popping it in the post or physically taking it there? Essentially little more than a scanner strapped to a modem, you simply popped your document in, let the fax machine take a copy, and then it would send all that info, over the phone lines, to the recipient’s fax machine, which would then spit out an exact replica. Just like dial-up, it required a separate phone line to really get the most from it, but that was a small price to pay for such technological wizardry. 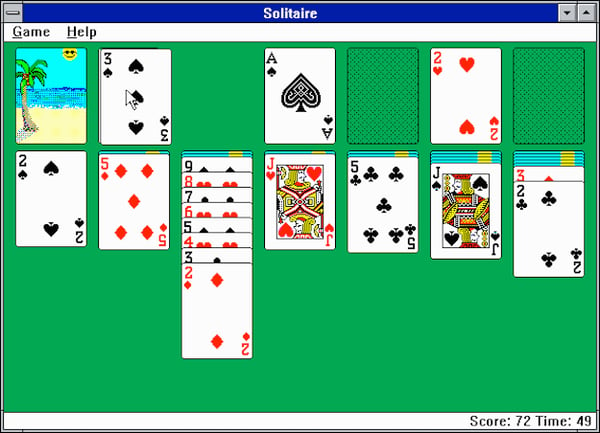 Microsoft Solitaire came with the release of Windows 3.0, and productivity levels were never the same again.

Lots Of Great Versions Of Windows

Windows began life in the 80s, but 1990 saw the release of Windows 3.0, a version of the operating system that really put Microsoft on the map. It included a whole bunch of technical and visual improvements over its predecessor, Windows 2.1, but the most important new feature by far was surely Microsoft Solitaire.

Things continued to improve with Windows 3. 1 in 1992, and then a few years later with Windows 95 and Windows NT – which brought 32-bit computing to the masses, as well as plug-and-play and much improved graphics. Microsoft ended the decade with Windows 98, which was just as successful, before releasing the woeful Windows ME right on the turn of the millennium.

Superseded by: Windows ME and Windows 2000.

Today, if you feel like your computer monitor isn’t quite in the right position, you simply reach over and give it a gentle push or pull, to move it where you want it. But in the 90s, you’d probably have to stand up, use both arms and brace yourself so you didn’t put your back out. Flat-panel displays did exist, but they were too expensive for most of us, and the predominant technology throughout the decade was the cathode ray tube – a type of display that had been around since at least the early 1930s. With thick, curved glass screens, CRT monitors were bulky, heavy, power hungry, and they needed screensavers to prevent burn-in. They were also, of course, beige. 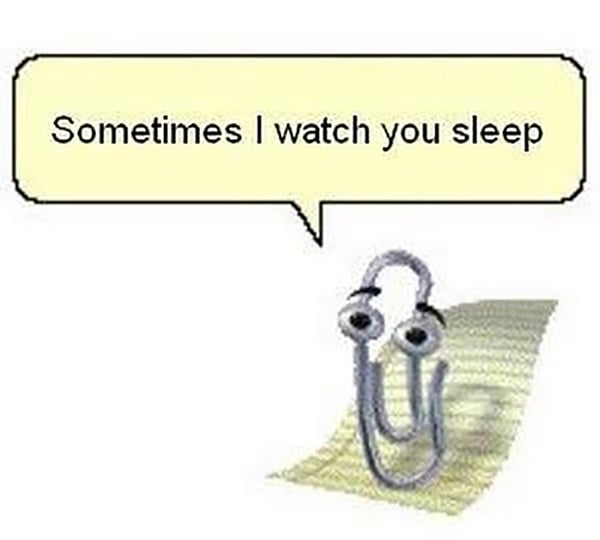 One of many, many memes inspired by Clippy.

Clippit (Clippy to his friends) was the default Office Assistant in Microsoft Office 97. An anthropomorphic paperclip, he also appeared in Microsoft Publisher, and his sole purpose seemed to be to annoy users by frequently popping up and offering unsolicited advice about how to use the software in question. Other assistants were available, but installing them usually meant using the setup CD, so most people just stuck with Clippy. In any case, the entire idea behind the Office Assistant was flawed, being based on research by Stanford University, which suggested that humans interact with computers using the same part of the brain as they use to interact with other people. Therefore, it seemed to make sense to add a human-like element to software. But, as users and experts alike pointed out afterwards, if people already treat computers like people, then adding another human face just leads to unnecessary, unwelcome interruptions.

Superseded by: Nothing. Microsoft did the decent thing and removed Clippy and co. from Windows XP onwards.

Are your IT solutions looking a bit long in the tooth and outdated? TMB can help you step into the future, with best of breed networks, cyber security and more. For an obligation-free chat about your requirements, please call us on 0333 900 9050 or fill in the form on our contact page.

Prev Previous What Is Two-Factor Authentication, And Why Should Your Business Use It?
Next Opera 3: Why Now Is The Best Time To Upgrade Next