Going against the current trend in business, Wetherspoons recently shut down all its social media accounts. And unlike that Facebook friend we all have who periodically makes a massive fuss about how they’re leaving the social network, deleting all their photos in the process, before quieting returning a few days later like nothing happened, Wetherspoons has stuck to its word. No longer do the company or any of its individual pubs have a presence on Twitter, Facebook, Instagram and so on.

Tim Martin, Wetherspoons’ chairman, said via Twitter (of course), that, “We are going against conventional wisdom that these platforms are a vital component of a successful business. I don’t believe that closing these accounts will affect our business whatsoever, and this is the overwhelming view of our pub managers.”

Martin also told the BBC, “On a personal level many of us are fed up with social media and think it has got damaging effects and a lot of people are on it far far too much,” he said. “It doesn’t do them any good it doesn’t do the country any good."

While the motivation behind the move is debatable, with some calling it a publicity stunt, many experts agree with Martin about how little difference this will make to the pub chain’s business. Despite having thousands of followers, Wetherspoons’ engagement with its customers via social media was already so low as to be essentially pointless, with much of it being dedicated to answering complaints.

Assuming this action proves as inconsequential as expected, does that mean other businesses will follow suit? And, even more important, should they? 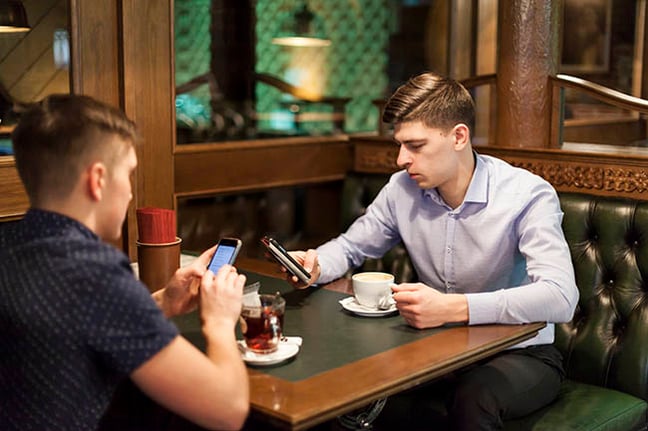 The familiar site of friends meeting up to chat (with other people online).

Why Wetherspoons Won’t Be Affected

When a huge firm like Wetherspoons makes a big decision like this, it’s only natural that smaller businesses will be tempted to do the same or similar. Before they line up behind it to ditch social media, though, they should think carefully about how their businesses differ.

For a start, Wetherspoons is a household name already. Its profile is high enough that it doesn’t need to use social media for publicity. It’s also a wealthy company, which can afford to advertise on TV, on billboards and in popular print publications.

Furthermore, its pubs can be found in practically every town in the country, and everyone knows they’re normally cheaper than other pubs. If you’re looking for a place to drink or get a cheap meal, you’re highly likely to find a Wetherspoons as one of your choices, without ever going anywhere near Twitter or Facebook.

Perhaps the only good reason for Wetherspoons to use social media is to make announcements, like company news and offers. But it can just as easily do those things via the mainstream news media, its own website and the official Wetherspoons magazine.

In contrast, most SMEs aren’t so well known that they can simply dismiss a potential source of advertising and customer engagement, so simply dropping it without some forethought is not advised.

That said, social media can be a waste of time when businesses aren’t using it correctly, and often the only way to have a significant impact on social networks is by paying for advertising. That’s not to say it’s impossible to have success from free, organic social media, but achieving that is often so difficult and time consuming that it’s simply not worth it.

Of course, success is determined by what you wish to achieve with social media. If you’re looking for it to bring in hundreds of customers, that’s probably unrealistic, and it will very likely involve spending money. If, however, you simply want an online presence that allows customers and potential customer to find out more about your company and to contact you, then social media can still be valuable. For example, a Facebook page is an easy way to publish photos of your business and to list things like opening hours and so on. You don’t have to post to it every day to make it useful, and a few updates a month would be enough to show people the account is active.

You also need to think about who your audience are and which social networks they’re likely to use. B2B firms, for instance, are more likely to find customers on LinkedIn than Facebook, while B2C companies would probably do better on Twitter. To use social media most effectively, you need to choose the networks that make most sense and stick to those, rather than spreading yourself too thin. Alternatively, you can use a service like Hootsuite or Buffer to schedule your social media posts in advance.

Ultimately, if you’re unable to achieve what you want with social media, then it might be worth dropping it – maybe permanently or just until you have more resources to dedicate to it. In the meantime, by allocating your efforts elsewhere, you might find your business benefits as a result. The important thing to remember is that although it can be useful, social media is rarely, if ever, a necessity for business. Like Wetherspoons has done, you have to find what works for you.

Prev Previous Cyber Warfare Affects Businesses Of All Sizes
Next Still Using Internet Explorer? Even Microsoft May Want You To Ditch It Next