Not content with all that, the area will now go down in history as the testbed region for 5G urban connectivity. With up to £50m available for the Urban Connected Communities Project, part of the government’s broader 5G Testbed and Trials Programme, a large-scale 5G pilot will be developed across the region. The three cities in the West Midlands which have been put forward as “hubs” for the trial are, as you might expect, Birmingham, Coventry and Wolverhampton.

What exactly is the scope of these trials, though? Well, initial plans have yet to be formally approved from the sounds of things, but there are a few key areas of focus. First up, the medical profession is to be front and centre, with the potential for outpatient appointments and emergency consultations and to be carried out using a video link, with so-called ‘connected ambulances’ being kitted out with video conferencing facilities to gather advice with specialists in the ground. This also has the potential for live streaming of patient data on route to the hospital, which could speed up immediate care on arrival. 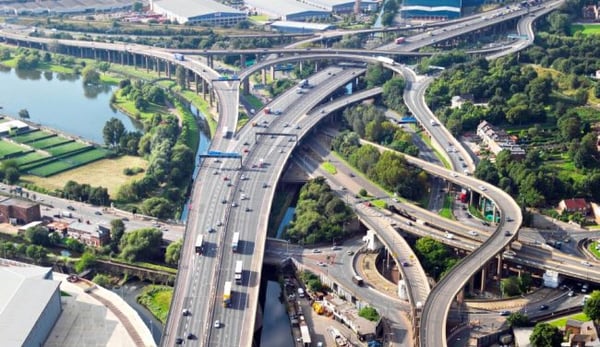 The majestic jumble that is Spahetti Junction.

Then there's the somewhat controversial issue of surveillance. One of the suggested applications for the project’s initial plans is for live streaming of CCTV footage from public transport, with the idea that passengers will feel safer against the threat of anti-social behaviour as live-streaming means appropriate action can be taken. 5G connections provides an opportunity for better quality and wider coverage than is currently possible. The trials might also implement the idea of combining artificial intelligence with CCTV, creating ‘intelligent cameras’ for identifying troublesome incidents.

Smart, intelligent cameras would have the potential for flagging such incidents and, ultimately, make people feel safer. Or in a Big Brother society? For anyone worried about technology’s potential for creating a surveillance state, the impending 5G trials do provide a chance to reflect on how technology provides for opportunities both good and bad.

But these are questions for another day. For now, the Urban Connected Communities Project will likely be watched closely and envied by businesses and individuals outside of those three cities. The trials, which are expected to last until 2021, should provide those cities with a wide, large-scale wireless infrastructure in which to test how the next level of connectivity can make urban environments safer and more efficient places to live.

Beyond the trials’ initial focus, there are so many potential applications for 5G. When the project was first announced, the government suggested other applications such as revolutionising tourist venues through the use of augmented and VR technologies, and the use of robotics and augmented reality to better manage assembly lines in manufacturing, helping to improve productivity.

The government has so far assigned £200m in total for the development of 5G technologies and in winning the bid for this trial, those three Midlands cities will become the starting point for the UK’s 5G future. Aiming to target areas of the cities with currently poor connectivity and high demand areas like city centres and mainline stations, these trials could form the building blocks of how we all connect and work in years to come.