TSB's Problems Can Be A Lesson To Us All


Unhappy customers is just the tip of the iceberg for the beleaguered bank.

If you ever need proof of how important IT is to a modern business, and how damaging it can be if it’s not done properly, just look at the ongoing TSB debacle.

After splitting from the Lloyds Banking Group, TSB had to rent the software it had been using, because it belonged to Lloyds. Rather than keep that going, it made the sensible decision to migrate to a new system - one that it would have total control over.

But as we now know, the migration of customer data from the old system to the new one has been an unmitigated disaster. Customers have been locked out of accounts, found money in their accounts that wasn’t theirs, been unable to pay bills or staff, have had account details seemingly vanish… the list goes on. And on and on and on.

Five days after the trouble first started, TSB’s CEO, Paul Pester, claimed that online and mobile banking were up and running. Where he got this idea from, however, is unclear, because by the next day, he was forced to admit the bank was still “on its knees”.

"Our mobile banking app and online banking are now up and running. Thank you for your patience and for bearing with us."

"Whilst the underlying platform is working well, it’s unacceptable that it’s taken this long to fix the problems some customers are having accessing their accounts. To begin to put things right we’ll be waiving all overdraft fees and interest charges for our customers for April."

Did TSB Miss The Signs?

A damning report on the Guardian website suggests there were plenty of warning signs, up to a year before this all happened. Quoting an anonymous insider, the report explains how a mixture of poor technical and business decisions led to the eventual crises TSB finds itself in today.

It seems Sabadell, the company that bought TSB, was warned about the high risk of its migration plans, which were seen by some as having too short a deadline and not big enough a budget. But Sabadell was not to be discouraged, and it pressed ahead with its plans, confident that it could successfully transfer TSB customers to its own Proteo software, as it had done with other customers in the past.

That, of course, proved to be hubris. While the development team behind the migration was posting photos on LinkedIn that showed them quaffing champagne and describing themselves as “champions”, their work was likely already unravelling. 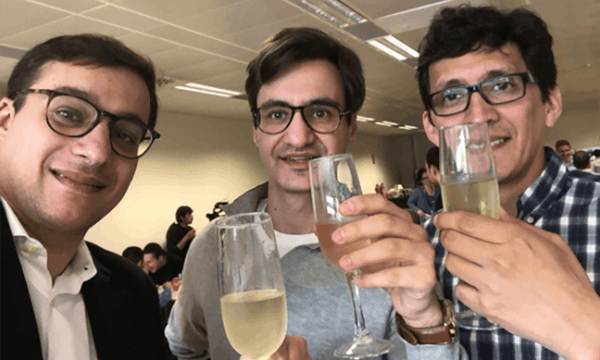 Those who worked on the migration were clearly confident it went well. This photo from LinkedIn was later taken down.

What Lessons Can We Learn From This?

As Paul Pester et al have discovered, it’s much better to take your time and invest properly in IT solutions, rather than trying to do things quickly in order to meet some arbitrary deadline. To be fair to TSB, it did recognise there were problems before the launch of the new software, and its arrival was delayed. But clearly it didn’t do enough to rectify the problems, and its testing can’t have been robust enough either.

For TSB, and for any other business engaged in such a project, this incident should also prove how important it is to listen to experts who may be telling you things you don’t necessarily want to hear. Had TSB heeded the warnings about the riskiness of this endeavour, it wouldn’t now be dealing with millions of unhappy customers and a PR nightmare.

And TSB’s problems don’t end there. Not only will the Financial Conduct Authority be investigating this technological meltdown, the Information Commissioner’s Office will likely get involved too, and significant fines may well follow. So even when TSB does finally manage to fix its IT systems and get its customers back online, its troubles will be far from over.

Every month, we send out a newsletter, summarising our blog content and informing you of important announcements. If you'd like to receive it, please head to www.tmb.co.uk/news-signup.

Prev Previous Free Cyber Security Quiz - How Well Is Your Business Doing?
Next Office 2019 Vs Office 365: What’s The Difference? Next