Teams And Slack: Who Wins The Most From Atlassian Dropping Stride?


The market for enterprise communication tools has lost one major contender, but it could provide an invaluable chance for Microsoft.

Australian software developer Atlassian is abandoning both its business chat applications, leaving many of its customers wondering where they should turn next. With both HipChat and Stride set to be discontinued, there will soon be thousands of businesses looking for alternatives, and right now, there are two obvious products to choose from: Microsoft Teams and Slack.

Because Atlassian is selling the intellectual property for HipChat and Stride to Slack, that might make it seem like the natural choice. However, it’s not clear how much of their functionality, if any, will eventually be added to Slack.

Furthermore, users of the on-premise version of HipChat will have to look elsewhere, because Slack, even in its Enterprise Grid version, is cloud-based only. Yet Atlassian is recommending that customers move over to Slack, a company that it has also bought a stake in.

Before we look at what Stride and HipChat refugees can do now, let’s look at why Atlassian decided that waving the white flag was the best way forward.

Microsoft Teams is a capable communication tool. Even better, many users already have it at their disposal.

Entering an already crowded market with a new product is never going to be easy, but when Atlassian unveiled Stride in September 2017, it did manage to turn some heads with its ease of use and integration with the developer’s other tools. Atlassian had already made a name for itself with collaboration tools like Jira and Confluence, and Stride was meant to build on those successes, improving on the company’s older HipChat software and taking on the biggest guy in the room, Slack.

But adoption was not as strong as Atlassian wanted, and ultimately neither Stride nor HipChat could challenge the dominance of Slack. Speaking to Bloomberg, Atlassian co-CEO Mike Cannon-Brookes said "We're very proud of what the team has built. But at the same time, it is a crowded space, and there's a pragmatic option there."

Now, in partnership, Slack and Atlassian are aiming to improve compatibility between the Slack app and Atlassian’s other programs.

Mike Cannon-Brookes, one of the founders of Atlassian. Photo: Katie Barget | TEDxSydney

Having already seen off the challenge of Stride and HipChat, does Slack have anything to fear from Microsoft Teams? It is, after all, the market leader for a very good reason: it does the job it’s designed to do, and it does it well. It’s got to where it is now by recognising the problems its users face and providing a solution for them.

But despite its accomplishments, it’s arguable that Slack has never had competition as serious as Teams. Atlassian, despite being a multi-billion dollar company, doesn’t have the depth of resources or the financial weight of Microsoft. And although Microsoft faltered somewhat under former CEO Steve Ballmer’s time in the big seat, things have picked up considerably since Satya Nadella took over.

A reinvigorated Microsoft alone might be enough to give Slack cause for worry or, indeed, to take out a full-page newspaper ad welcoming the newest competitor to the market, but there’s more to Teams than just the backing of a technology colossus.

Microsoft Teams also benefits from being tightly integrated with the rest of the Office 365 productivity family. Many businesses will already have it as part of their Office 365 subscription, and those that don’t can add it easily and for a low monthly cost. That’s good news for Teams, because Office 365 uptake is growing rapidly, as businesses embrace the power and convenience of cloud-based software.

However, thanks to the release of a free, standalone version of Teams, unveiled in July 2018, it’s now no longer necessary to have an Office 365 account to be a Teams user. As you’d expect, the free version has some limitations, but it still offers a surprising amount of functionality, and for Microsoft, it will further encourage uptake.

Comparing Teams and Slack side by side, each one has its own strengths and weaknesses, and although Slack has had more time to develop and mature, Microsoft has rapidly improved Teams to the point where there’s very little to choose between the two. Ultimately, it may come down simply to whether you need integration with Microsoft tools or not; if your business is invested in Office 365, then Teams is the natural choice. 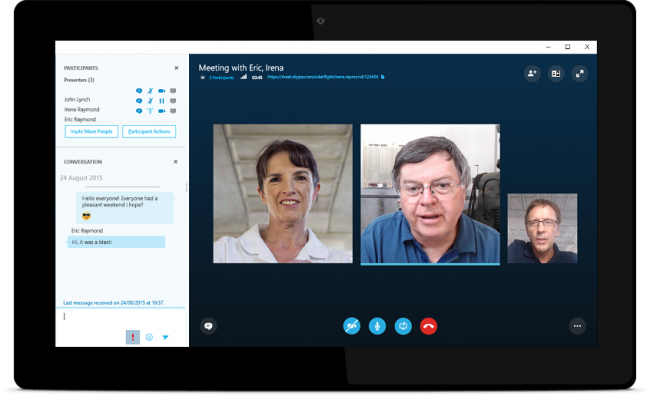 Skype for Business still have an important role to play in enterprise settings.

What About On-premise Chat?

Like Slack, Teams is a cloud application. For many organisations, that isn’t a problem, but some don’t want or cannot use cloud software, and they need an on-premise solution instead.

If they’re Microsoft users, then it’s likely they already have what they need: Skype for Business. Although there’s a large degree of overlap between Skype and Teams, they will coexist in future, and Skype for Business will be the default option for self-hosted chat. Now that HipChat is being dropped, that could make Skype the best alternative for its users.

Whatever happens, Atlassian’s customers have a tough decision to make about their next chat application. Teams and Slack are going to be right at the top of the list, but there many others to consider, including Google Hangouts and Cisco Spark.

Who knows how this will be play out, but Microsoft will no doubt be hoping that Atlassian’s loss will be Team's gain.

Want to see Teams in action? Contact us for more information and to arrange a free product demonstration.