Why Are Free IT Solutions Actually Free?


You might be paying in ways you never even considered.

As Janet Jackson and Luther Vandross once sang, the best things in life are free. Chances are, though, they probably weren’t referring to free software and internet services. But if they were, would it be true? Or would the logic of an idiom far older than Jackson and Vandross be more accurate - that nothing in life is free?

In fact, as is often the case, the truth lies somewhere in the middle. While there are plenty of perfectly good, free and open-source programs and services, nearly all of them make money in some way or another – some of which are highly problematic.

Here are just a few ways free stuff is paid for. 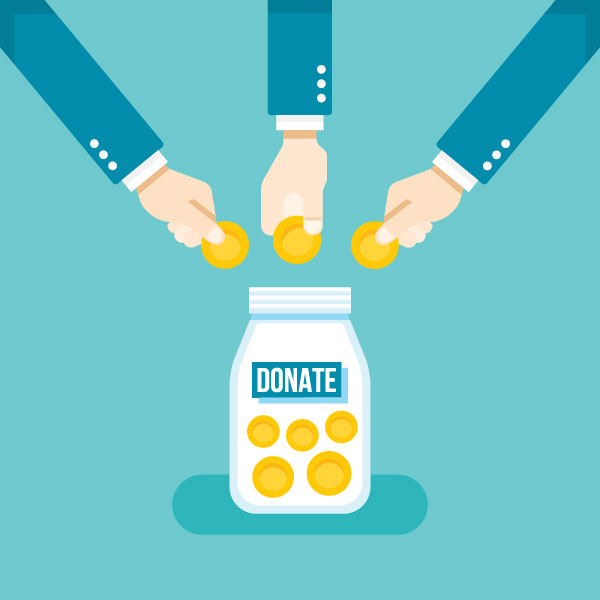 Donations can be a good way for developers to make money from their otherwise free software.

Sometimes free software and services are funded by nothing more than donations. For instance, the Ko-fi scheme provides a straightforward way for people to make small donations to content creators, under the guise of buying them a coffee. Others let users click on a button that says ‘Buy me a beer’, ‘Support our site’ and so on. In the case of Wikipedia, it’s a non-profit charity, which means it’s allowed to directly ask for donations – something which has helped make sure its coffers are normally brimming healthily.

Risks: From a payment point of view, donation-funded solutions are fine. But as with any free software, you need to think carefully about whether it’s appropriate for your business. With open-source solutions, which can be changed and shared by anyone, there’s always a risk that someone might take the code and insert malware into it. Also, there’s the matter of vulnerabilities. If there are security weaknesses in the code, it might not get fixed quickly – if it gets fixed at all. Finally, if you’re not paying anything, then you probably can’t expect any kind of support. If something goes wrong, you’re probably on your own. 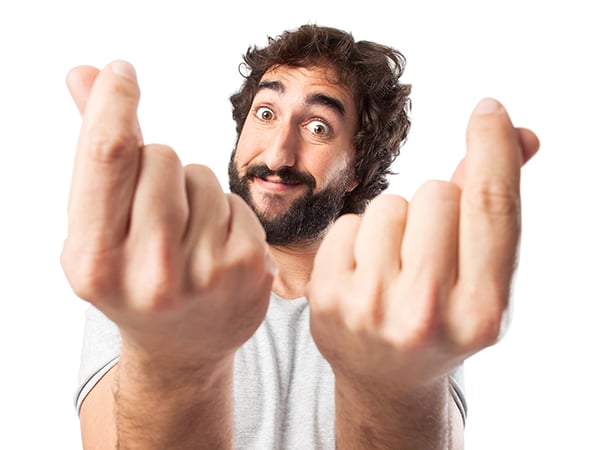 Eventually, it all comes down to this (money, not a bearded man waving his hands in your face).

Pop-up ads, banner ads, video ads and more. These are all perfectly valid ways for companies to make money from products they don’t charge for. Many mobile apps, for example, are plastered with banner ads, and frequent video ads are common too. The firms that are featured in the adverts, of course, pay a fee, usually when their ads are viewed or when they’re clicked on.

Risks: Apart from being really annoying, ads and adware can be risky in a couple of ways. For a start, the thing that’s being advertised could be malicious, such as a fake anti-virus program that pretends the user has a ton of malware on their system. Sometimes, though, the source of malware can be the advert itself. Crooks can use what’s called malvertising to infect people’s computers. These fake adverts are injected into legitimate advertising networks, meaning they can appear even on trusted sites and products, and when a victim clicks on them, they can run code that installs malware on their computer.

Although not so common now, the browser toolbar was once a popular way for free software to find funding. This adds a toolbar to your web browsers, with links to third-party websites and a search bar that uses a search engine chosen by the advertiser. Normally, the installation of this file will be bundled in with the installer of the main program, so users often add these programs to their browsers by accident.  One notable example was the Java browser plug-in. During its installation, there was a preticked box that told you you were about to install the Ask.com browser toolbar. If you missed it, then you’d end up installing the toolbar. 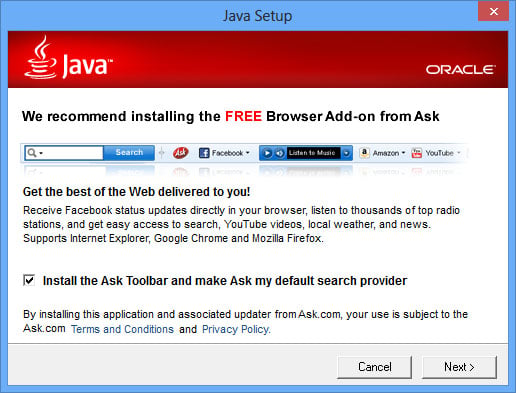 The Ask.com toolbar was, to put it mildly, not very good.

Risks: Browser toolbars aren’t usually a risk, but they are often a major annoyance. In the case of the Ask.com toolbar, not only would you find an intrusive toolbar added to all your web browsers, but your browser’s home page and default search engine would also be changed to Ask.com (once known as AskJeeves). To make matters worse, it was difficult to remove or disable. Although it’s improved in more recent times and is no longer regarded as ‘unwanted software’ by some, this and toolbars like it should be approached with caution.

These toolbars often contain spyware too, which tracks your browsing habits (albeit anonymously). In some cases, they may even be used to deliver malware.

As the ongoing Facebook farce has reminded us all, our personal data has value not just to us but to companies that want to sell things to us. Like browser toolbars, a lot of free software and services sell usage data to third parties, who will then use it to inform their advertising and marketing strategies.

Risks: Legitimate firms will collect data anonymously. Google, for instance, collects information about what people search for, as well as things like your age and gender, but it doesn’t sell information that directly links you personally to your search history (although it might not be quite as anonymous as you'd want). Unscrupulous developers, however, will be less worried about your privacy.

Of course, if you’re okay with your data being shared, then it’s a fair exchange for goods and services; it’s just important to know that what you’re getting isn’t really free.

‘Mining’ cryptocurrencies like Bitcoin involves solving complicated maths problems using computers. If you don’t have the computing power yourself, you can borrow it from other people, which is exactly what some developers do, via cryptomining add-ons for web browsers, mobile apps, websites and computer programs.

Risks: Although some applications may use your computer for mining with your consent, there are many that will do it without ever telling you. This makes it a form of malware just like any other. And if your computer is being used for mining bitcoins, who says it’s not also being used in DDoS attacks and spamming campaigns. 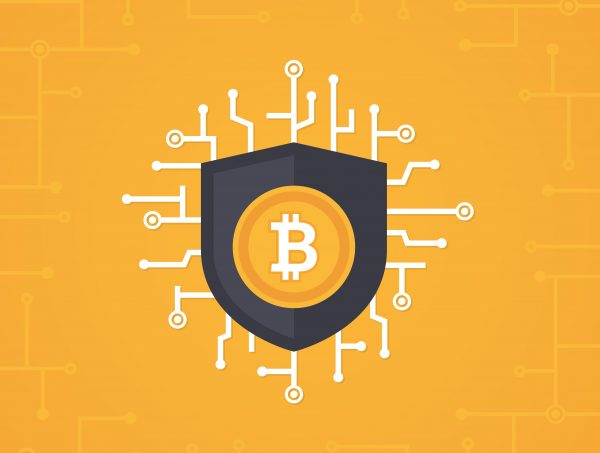 Cryptocurrency like Bitcoin has given developers another reason to give their work away.

To Promote Something Else

Sometimes companies will give something away in order to promote something else – something, vitally, that makes them money. One example would be Google Chrome. As well as tracking browsing habits, it acts as a funnel that leads users towards Google’s other services, like Google Search, Gmail and Google Docs. Each of these is then used to sell advertising. Another example would be free mobile games that are based on TV shows or movies. Although some of these contain in-app purchases, many are completely free, and the only reason they exist at all is to promote something else.

Risks: At some point, information about you is probably being collected, but it’s likely to be anonymous and therefore nothing to really worry about.

There are some great free applications, like VLC, Gimp and Audacity, which are fine for home users, but it’s rare that such software will meet the requirements of business users. Sometimes they’re simply too rough around the edges, not providing the kind of user experience that commercial alternatives will. More importantly, they are unlikely to have great customer support – if they have any at all. The simple fact is that big software companies have the money to invest in this kind of thing and the motivation to do so (customer retention).

As for free services, many of them are only free up to a point. For example, you could schedule your social media posts with something like Buffer or Hootsuite, but to get the most from them, you’re going to have to upgrade to a paid account. The same goes for things like Eventbrite, Facebook and Twitter. There’s a lot you can do for free, but if you want advanced features or adverts, then you’ll have to cough up some cash.

It all comes down, of course, to your individual situation. For instance, if you need to quickly edit an image file one day, then you don’t need to buy a licence for Photoshop; a free image editor would be fine for such occasional use. But if you run a design agency, then you’re going to have to invest in professional tools.

In most cases, a mix of free and commercial solutions is fine – as long as you’re aware of where everything is coming from and how the developers of free stuff are making their money.

Are you taking risks with free software and web services? Email TMB at info@tmb.co.uk and book a free IT audit to find out.