Cryptocurrency: Why It’s Still Not Worth It

If you like losing money, hop on board. Otherwise, you should hold off for now.

Depending on who you talk to, cryptocurrency is either the best modern invention since the smartphone or it’s nothing more than a hyped-up Ponzi scheme covered by a thin veil of mainstream acceptability. Previously, when TMB wrote about this subject, we predicted big players like Bitcoin might have the staying power to survive any kind of crash in the cryptocurrency market, but we recommended that SMEs should probably avoid getting involved – at least for now. But more than a year has passed since we wrote that, so what about now? Is cryptocurrency worth it?

Let’s begin by looking at the daddy of all crypto, Bitcoin. In our previous post, we found the price of one bitcoin to be £7,631. Not bad. If only the price hadn’t been £14,140 just one month before.

Today, a single bitcoin can be yours for the bargain price of £2,794.

If you’d bought bitcoins when they cost mere pennies, then you’d still be in profit. At the other extreme, if you got into it at its peak, on 17 December 2017, it would have cost you $19,783 per bitcoin, which equated to about £16,832 at the time. If you were unlucky enough to have been swept up in the hype around this time, anything you invested in Bitcoin would now be long gone.

Bitcoin, however, is just one of many cryptocurrencies. How do the others fare in comparison?

That depends, of course, on which ones you look at – and you have plenty of choice. Right now, at CoinMarketCap, there are 2,098 cryptocurrencies listed, a number that starkly illustrates the ease with which new coins can be set up (more on that shortly). 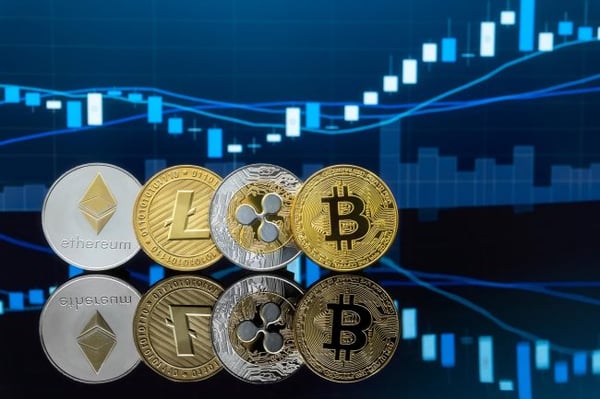 There are various ways to sort the different cryptocurrencies at CoinMarketCap, but ‘Price’, which indicates the price of each coin, is not necessarily the most useful. Right now, the most expensive per-coin price is a whopping $17,930.76. That will give you one NANOX, the coin of the Project-X cryptocurrency.

Great, but there’s only one coin in existence (as much as a purely virtual currency can be said to exist). The figure that really matters is the market cap (value), which is the total value of all the coins in circulation, and per-coin prices should be viewed in that context. In the case of Project-X, the value of the 0.07826400 NANOX coins in circulation is just $1,403.

Based on this criterion, the top five cryptocurrencies are:

Bitcoin is way ahead of its nearest rivals, but these are all fairly well established coins, which have been around for years (EOS, the youngest of these five was launched in 2017). How much was each of these coins worth roughly a year ago (1 February 2018)?

As the top five coins available right now, these could be considered the safest bets, but right across the board they’re worth significantly less now than they were 12 months ago.

Crypto proponents might point out that all currency values fluctuate, including traditional ones. The pound, for example, has slowly been dropping in value for a while now, going from $1.42 on 1 February 2018 to $1.32 today. In extreme cases, where hyper-inflation occurs, countries such as Zimbabwe have seen their currency become essentially worthless. However, such instances are not the norm and are usually the result of financial mismanagement.

In most cases, currency values don’t change that much, but with crypto, big price fluctuations have become the norm, with an overall downward trend for quite some time now. Based on that evidence, cryptocurrency is a poor investment right now.

It’s also not much good as an actual currency, because not only is its value falling, it simply doesn’t have the same level of acceptance as ordinary currencies. That’s not to say that crypotcurrencies don’t have some advantages, such as anonymity and decentralisation, but in most cases it’s easier to use a credit card.

Despite the hammering that cryptocurrencies have taken in recent times, however, many people are still positive about its future. The Independent described the 2018 price crash as “as blip, not a bubble bursting”, while ZDNet declared that “The bubble is over, here comes the boom”. There are many more stories like these, and whether they agree there was a bubble or not, they all assert that the future of crypto is bright.

How can they say this when all the evidence suggests otherwise?

One possible explanation is the people writing these articles have invested in cryptocurrency themselves, so they have a vested interest in promoting it, thereby raising confidence in it and potentially its value.

But there’s more to it than that. The feeling among a lot of cryptocurrency supporters is that the falling prices are a correction, and that as the hype falls away, the technology will mature and the markets will stabilise. Indeed, the very fact that JP Morgan has created its own crypto-currency indicates that blockchain-based currency is probably here to stay.

What form it takes, though, is anyone’s guess. As we said before, there are thousands of cryptocurrencies doing the rounds, and there will no doubt be more in future. Get in early on some of them, and you could potentially make a lot of money.

Alternatively, you could lose it all, because many cryptocurrencies disappear as quickly as they were originally magicked into existence. Head over to Dead Coins and you can browse through hundreds of now-defunct cryptocurrencies. As well as coins that died through lack of interest, there are many that are straight-up scams, run by criminals like Randall Crater, the creator of My Big Coin, who has been arrestedand is now facing multiple charges of fraud. Frequently initial coin offerings (ICOs) are nothing more than pump-and-dump schemes, where criminals set up new coins, encourage people to buy them to artificially inflate their price, and then sell all their own coins while the price is high.

Despite these problems, blockchain, the technology that power cryptocurrencies, has many other uses, so it seems unlikely that it’s going to die out. Bearing that in mind, cryptocurrencies, in some shape or form, will survive too, and at some point we’d guess that prices of the major coins like Bitcoin and Ethereum will stabilise and fluctuate less dramatically; they might even rise again. If you could guess when that’s going to happen, that would be the best time to invest in them. If you can’t, then you’ll have to accept that you possibly won’t get back what you put in.

Prev Previous HoloLens 2: Good For Business Or Not?
Next Leading By Example: TMB Nominated For Network Group Award Next